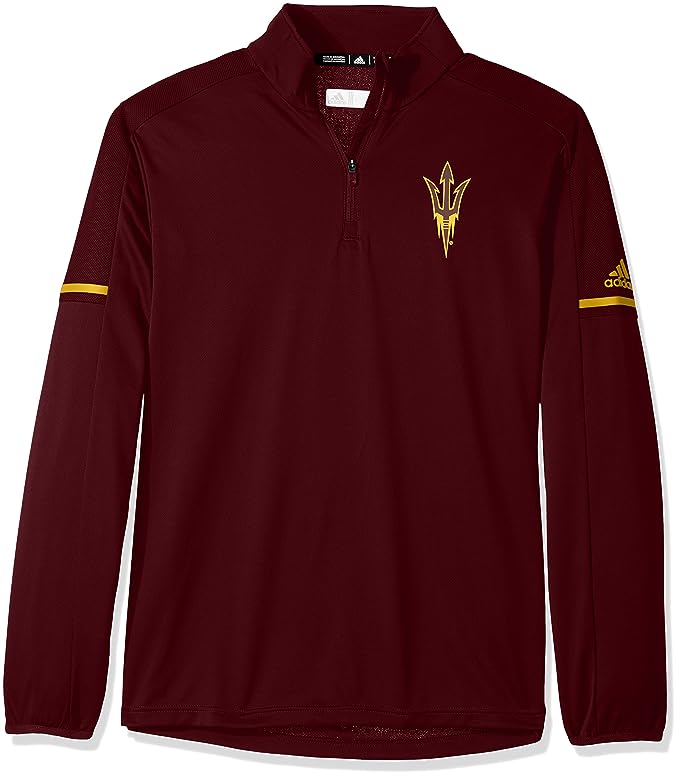 The official state sun sideline quarter-zip of the 2017 season is a game-changer and a must-have for any fan. This pullover by Adidas is perfect for a relaxed evening to show your school pride or a beautiful top for those casual days at the office or on the links.

The Sun Devils played in the Border Conference between 1931 and 1961, before joining the Western Athletic Conference. Led by legendary head coach Frank Kush, the Sun Devils posted a remarkable 64–9 record between 1970 and 1975, culminating in a 17–14 upset of the Nebraska Cornhuskers in the 1975 Fiesta Bowl.

After the 2006 season, Dirk Koetter was fired after six seasons, and on December 6, 2006, athletic director Lisa Love hired Dennis Erickson to become the head coach at ASU. Erickson, in his first year as coach of the Arizona State Sun Devils, led the team to 10 wins, a share of the Pac-10 title with USC, and the Holiday Bowl against the University of Texas Longhorns. Dennis Erickson was fired on November 28, 2011, after five seasons with the Sun Devils. He was replaced by coach Todd Graham on December 14, 2011. Lisa Love was fired from her position as Vice President for University Athletics and Athletics Director on March 28, 2012, and was immediately replaced by Steve Patterson. The current Athletics Director since 2014 has been Ray Anderson, who selected former NFL player and coach Herm Edwards to replace Todd Graham as Arizona State’s head coach in 2018.